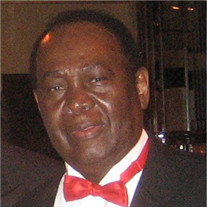 Dr. James Albert Wilson, 93, of Mahwah, New Jersey, passed away on Monday, April 6, 2020 from complications related to COVID-19. Dr. Wilson was a pioneering Dominican American physician. Dr. Wilson was born in Barahona, Dominican Republic on March 17, 1927 to father John Glasgow Wilson and mother Cidalise Bart. He attended the Universidad Autónoma de Santo Domingo Medical School and graduated in 1957. He completed his medical residency in New York City at Coney Island Hospital, Harlem Hospital, Maimonides Hospital, and Jacobi Hospital from 1958-1964 before returning to the D.R. Upon his return to Barahona in 1964, he practiced and taught medicine at Jaime Mota Hospital, where he was medical director. In 1966, he married his wife Nilda. That same year, they immigrated to the U.S. and moved to the Washington Heights neighborhood of New York City, where they opened their medical clinic. He and his wife lived in Washington Heights from 1966 to 1968 and then moved to Bergen County where he would spend the rest of his life, raising their family in Teaneck (1968-1985) and Paramus (1985-2006) before retiring to Mahwah in 2006. Dr. Wilson was among the very first Dominican American physicians in the United States to establish a medical clinic (in Washington Heights, New York City), serving thousands of patients in the community for over 40 years. He was a family physician in the most traditional sense, often making house calls to serve patients. He believed in the time-honored code that physicians focus on the healing and wellness of patients, and thus he served patients regardless of their financial capacity to cover medical expenses. He also served his patients through his hospital privileges at the Columbia University Presbyterian Medical Center (now New York Presbyterian Hospital). Dr. Wilson was a pillar and inspiration in the Dominican community, in the US. He was the co-founder of the Dominican Medical Society in 1977, as well as a former President of the both the NY Highbridge Lion’s Club in 1980 and the Northern Manhattan Lion’s Club in 1989. He was District Governor of Zone 20R2 of the New York State Lion’s Club in 1985. “El Profe”, as he was affectionately known in the community, also gave back by sponsoring and helping dozens of physicians who came to the United States from the Dominican Republic to practice medicine in New York City. He was a community philanthropist, supporting multiple nonprofit charities that helped children and families in need in both the United States and the Dominican Republic. He will forever be remembered as a loving husband/ father/ brother/ family man, selfless doctor, storyteller, poet, grand orator, as well as for his beautiful singing voice and his love of traveling, history, science, professional boxing and New York Yankees baseball. He is survived by his wife of 54 years, Nilda L. Wilson, his brother Celland O. Bart and wife Maria, his six children; Max R. Wilson, James A. Wilson Jr. and wife Magdelyn, Gregory M. Wilson, Cid D. Wilson, John G. Wilson [a.k.a. “Magic Juan”], and Adelcida Wilson; and eight grandchildren; Victoria M. Ramirez, Isabella Y. Wilson, Alina S. Wilson, James Anthony Wilson, Mary E. Wilson Liberato, Cidaliris Wilson, Jany Wilson and Amerasia I. Hinojosa-Wilson; and two great grandchildren, Adeline M. Liberato and Danette Liberato. The family held a private funeral at the Hunt-Stellato Funeral Home in Fort Lee, NJ on April 14, 2020. They will announce a larger memorial gathering on a future date due to the current coronavirus pandemic. In lieu of flowers and gifts, the family asks that donations be directed to Feeding America at www.feedingamerica.org in memory of Dr. James Albert Wilson using the email address of Cid Wilson at [email protected]

The family of Dr. James A Wilson created this Life Tributes page to make it easy to share your memories.