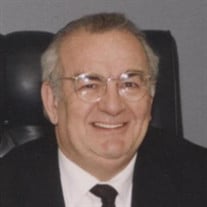 Jeremiah Francis O’Connor Jeremiah F. O’Connor, of Edgewater, NJ died on Wednesday, May 13 of natural causes at 86 years old. He died at home surrounded with the love of his family. Jeremiah was born in Manhattan, NY on May 18, 1933. He was the first-born son of Jeremiah F. O’Connor and Helen Murphy, immigrants from County Kerry, Ireland. A first generation Irish American, Jeremiah had a lifelong love of education. He was a graduate of Rice High School in New York where he met and maintained lifelong friends. He graduated with a B.A. in Economics and Finance in 1955 from Iona College, New Rochelle, NY. At Iona, Jeremiah began his illustrious political career when he served as the President of his Senior Class while working at nights to pay for his education. Jeremiah began his professional career with Bell & Howard as a Commission Salesman. He retired in 1987 as Senior Vice President of Sales, after 26 years as a Marketing Executive. A man of enormous energy, Jerry then pursued careers in Financial Institutions & Banking. He was Vice President for Finance at NJ Capital Market in Hoboken, NJ. Jerry was an original Incorporator and Vice Chairman of Interchange State Bank of New Jersey, Incorporator of New Jersey Bank for Savings, and Bridgeview Bank of Bergen County. He retired in 2008, as a founding partner of NJ Financial Group, Hoboken, NJ. A consummate Irish American politician and lifelong proud Democrat, Jerry began his political career in Bergen County with his election to township council in Saddle Brook in 1963. He served as Saddle Brook Mayor in 1965. In that same year, he was elected to serve two terms in the NJ State Senate representing Bergen County, NJ. Because of his honesty, intelligence, and political savviness; in 1966, Governor Richard Hughes appointed Jerry to numerous state commissions and boards including the State and County Municipal Government Commission, the Local Finance Board, and as Delegate to the New Jersey Constitutional Convention. In 1974, he was elected to the first of two terms as a member of the Bergen County Board of Freeholders where he served for five years as the Board Director. Under his leadership, Bergen County was forever changed with the establishment of many social programs and commissions that continue to enrich the lives of Bergen County residents today. In 1976, Governor Brendan T. Byrne appointed Jerry as a member of The Hudson River Development Commission. In 1980, Jeremiah was the Bergen County Chairman for the Ted Kennedy Presidential campaign. Following, in 1990, Jeremiah was the Democratic Candidate for County Executive in Bergen County. He also served as a Trustee of Bergen County Community College and on the Advisory Board at Felician College. In 1991, Jeremiah was appointed by Governor Jim Florio to the Board of Public Utilities. A kind and humble man, Jerry was gifted with a clever mind, a wonderful laugh and sense of humor, and, incredible Irish wit that he shared with everyone! He was a lover of all things Irish, Notre Dame, and was a voracious reader of History all his life. Most importantly, Jerry was a family man and a loyal friend. He is survived by his wife Theresa, with whom he shared 30 years of love and happiness. They traveled the world together and opened their home in Avon By the Sea to their entire family, friends, and friends of friends for 21 years. His favorite place was sitting on the front porch, smoking his pipe, reading his newspapers and books, surrounded by the company of loved ones. Jeremiah is survived by his children, Jeremiah F. O’ Connor (partner Susan), Margaret Chirico (husband Manny), Brian O’Connor (wife Victoria), Kevin O’Connor (wife Bunny), Robert O’Connor (wife Patricia) and Terry’s children, Kelly King Gagliardi (husband Anthony) and Brendan King (wife Keri). He will forever be missed by his 15 grandchildren, Jenna, Dayna, Tara & Jeremiah O’Connor; Michael Chirico (Melanie) and Matthew Chirico; Ashley (Eric), Christopher & Elizabeth O’Connor (Matt), Jaclyn O’Connor, Colin & Molly O’Connor, Jack & Isabella Gagliardi, and, Liam King. He is also remembered by Beth O’Connor and her children Zach & Lexie Chernalis. Jeremiah is survived by his sister Helen Hayes (Martin) and predeceased by his brother Donal (Maryann) and predeceased by his daughter in law Beverly Belcastro O’Connor. Jeremiah is loved by a clan of brother & sister inlaws, nieces & nephews, and lifelong friends whose lives he touched immensely. A private funeral will take place on May 18, 2020 at Hunt-Stellato Funeral Home and burial at Westwood Cemetery. An Irish celebration of Jeremiah’s life will take place at a future date. Memorial contributions in Jeremiah’s name may be made to: The Center for Food Action, 192 W. Demarest Avenue, Englewood, NJ 07631 or at CFANJ.org to support those in need. “THERE WILL NEVER BE ANOTHER ONE LIKE HIM”

Jeremiah Francis O&#8217;Connor Jeremiah F. O&#8217;Connor, of Edgewater, NJ died on Wednesday, May 13 of natural causes at 86 years old. He died at home surrounded with the love of his family. Jeremiah was born in Manhattan, NY on May 18,... View Obituary & Service Information

The family of Jeremiah Francis O'Connor created this Life Tributes page to make it easy to share your memories.