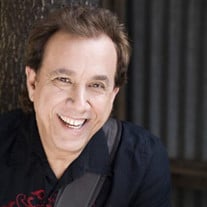 Jorge Alberto Casas (January 26, 1950 - January 31, 2019) Jorge Alberto Casas, aka The Fringe, 69, passed away peacefully in his sleep in the early hours of Thursday, January 31, at home in Jersey City, NJ. He was born in Centro Habana, Cuba to Jorge Casas and Julia (then) Bru de Casas (now) Pazos. He devoted his life to the love of music and his family. He was an avid fan of the Pittsburgh Steelers, the Pittsburgh Pirates', Roberto Clemente and The Beatles. During infancy, Jorge and his brother Pedro, battled Polio at the same time. An exhaustive medical routine was implemented and followed by his mother Julia and his doctor, and succeeded in curing this relatively new disease before the introduction of the Polio vaccine. After fleeing Cuba in 1959, Jorge lived in Florida before moving to Puerto Rico, where he spent most of his younger years when his career as a musician began. Jorge played with the popular group “The Challengers.” Later, he and 5 other friends set up one of the best rock bands ever in Puerto Rico, Abram Shoo. He then joined The New Zealand Trading Company and moved to the USA to expand his horizons. He began to study music by mail, and at the same time he toured with the band “Cyclone.” In 1979, Jorge enrolled in the “Studio Music and Jazz” program at the University of Miami, where he thrived in the classroom and in performing ensembles, including the renowned “Concert Jazz Band.” During his time at the University of Miami, Jorge met friends and musicians that he continued to work with for the rest of his life. He created his band “The Company” during this time, navigating the early '80s music scene in Miami, and successfully leading the way for what was to come next. In 1986, along with five members of “The Company,” Jorge was brought on board as musical director of the “Miami Sound Machine.” As a bassist, composer, arranger and producer, the music that he helped create became an integral part of the Miami Latin-pop and Latin-jazz music that continues to reshape the industry. His career also included work with Jimmy Page and David Coverdale, Julio Iglesias, and many others, but it was the 32 loyal years with Emilio and Gloria Estefan that inspired and fulfilled him, culminating with his work on the Broadway show “On Your Feet.” There isn’t a musician who played with Jorge that could walk away from the experience without knowing they had just been in rare company, musically and joyfully human! What followed were world tours, hit songs, multi-platinum and gold records, an American Music Award, and a Grammy nomination for Producer of the Year, but what Jorge enjoyed the most were the friendships, the challenges, the journey and the adventure. He leaves his wife Gina, daughter Catherine, son Dylan of Jersey City, NJ; mother Julia Pazos and stepfather Jose of Lyndhurst, NJ; mother-in-law Judith Henzlik of Lees Summit, MO; three siblings, Pedro Casas and wife Julia (Muñeca) Cordero de Casas of PR; Mayra Enquist and husband Dean of Lyndhurst, NJ; Alberto Casas of PR; Maria Esther Rabassa of PR; brother-inlaw Rick Inglima of Lees Summit, MO; five nephews, Pedro Casas and wife Rita Bermudo de Casas of Santa Fe, NM, Alberto Casas and Kamil Rivera of PR; Manuel Casas and wife Vanessa Valedon de Casas of PR; Jorge Casas and wife Monica Rivera de Casas of PR; Luis (Pirulo) Molero and wife Jennifer Gonzalez de Molero of PR; two nieces Katya Molero de Roca and husband Roberto of Orlando, FL; Hannah Inglima of Lees Summit, MO; two cousins, Abelardo Bru and wife Delia of Sarasota, FL; Julia Bru and wife Suzy Izaquirre of Miami, FL; many great-nephews; great-nieces; colleagues and friends. He is predeceased by his father Jorge Casas and stepmother Esther Suarez de Casas. Family and friends are invited to visit on Wednesday, February 6, from 10AM to 1PM for a viewing, followed by a Celebration of Life service at the Stellato Funeral Homes, Inc., 425 Ridge Road, Lyndhurst, NJ 07071, Tel: 201 438- 4664. Internment to follow at Holy Cross Cemetery, 340 Ridge Road, North Arlington, NJ 07031. In lieu of flowers, contributions may be made to the Frost School of Music Scholarship Fund. Link and instructions as follows: CLICK HERE to Donate To Frost School of Music Scholarship Fund Directions for giving:  Click on “Designation” select “Frost School Of Music Scholarship Fund” At the bottom, after putting in all the payment information, please enter under TRIBUTE INFORMATION. Select “Memorial” and enter JORGE CASAS under first and last name.

The family of Jorge Alberto Casas created this Life Tributes page to make it easy to share your memories.