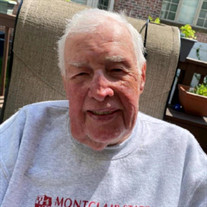 Joseph Thomas Ferrie March 8, 1926 to May 31, 2021 On Saturday, June 18, 1949, a skinny 23 year old outfielder who grew up playing on the sandlots and fields of Edgewater made his debut with the Burlington Cardinals of the Northern League.... View Obituary & Service Information

The family of Joseph T. Ferrie created this Life Tributes page to make it easy to share your memories.