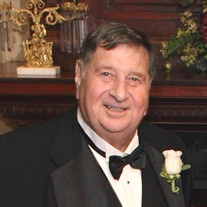 Joseph Ernest “Ernie” Potere, 84 formerly of Fairfield, New Jersey passed away Thursday, April 16, 2020. Beloved and dedicated husband of the late Marguerite (nee Wagner) Potere. Loving Father of Renee Potere and her partner Eric Francais, Gregg Potere and his wife Melissa, Thomas Potere and his wife Alison, Christine and her husband Brian Cusano. Cherished and loved grandfather of Meagan, Kristen & G. Jeffrey Potere and Frank, Matthew & Jake Cusano. Ernie first started his professional career working with his father at a local manufacturing plant. At the young age of 18 he was offered a position at New Jersey Bell, a prestigious accomplishment. Ernie was worried about giving his father this news, and shared his dilemma with the plant supervisor. The plant supervisor promptly called Ernie and his father up to the front office, telling Ernie “if you don’t take this opportunity now you will forever regret it.” Ernie’s father was so proud of his son and this great news, and the plant supervisor fired Ernie on the spot, telling him to accept this incredible opportunity. He served in the National Guard and then was drafted by the United States Army during which time he was stationed at Fort Devens, Massachusetts. Ernie returned to New Jersey Bell after his honorable discharge in 1963 and set out on a distinguished career path that would span nearly 35 years with the phone company as it was called then. After seeing many changes and mergers throughout his career, he retired in 1988 from AT&T at an incredibly young age of 52. In true Ernie fashion, retirement didn’t stop him from working hard and excelling. The next chapter in his career saw him join The Fallivene Agency as a licensed realtor in West Caldwell, NJ. Then, joining his son as a licensed loan originator in the mortgage business and becoming the Broker of Record for Patriots Real Estate LLC, the family’s real estate company then located in Livingston, NJ. Ernie’s dedication to the town of Fairfield was extraordinary. He was a little league coach for 15+ years serving as coach and committee member. Many men who Ernie coached when they were boys still kept in touch with him, always sharing good memories, thanking him for his mentoring and greeting him with a hug whenever they saw him. He was also on the Fairfield Zoning Board of Adjustment for over 40 years having served as both Chairman and Vice Chairman. He loved being involved as the town of Fairfield developed into the town it is today. Many applications came before the Zoning Board of Adjustment and Ernie was known as a fair board member who campaigned for the good of the town and its residents. By far one of Ernie’s most selfless acts was when he and his very close friend Phil Oddo started the Knights of Columbus Council in Fairfield. Ernie would be the Charter Grand Knight of Fairfield Council #6380 which went on to have hundreds of members through the years and still exists today. Here, Ernie would meet some of his closest and best friends in town as they served Catholic charities and ran many fundraisers for people in need. The carnival at St. Thomas More Church is a yearly event the Knights of Columbus ran as a fundraiser that all people in Fairfield would remember. He also served as an usher and lector for his parish, St. Thomas More Roman Catholic Church. What truly set Ernie apart was his unwavering love and support for his wife and their four children. He was a wonderfully devoted and committed husband to Marguerite, whom he was married to for 57 years. Ernie was a family-oriented man, and always there through the good times and the bad. Ernie made sure his family spent their vacations with cousins, aunts, uncles and close friends where lifelong memories and family bonds were made. His larger than life personality and comedic escapades ensured everyone had the time of their lives on every trip. During hard times, he was our brave leader and guiding light, navigating us all through any difficult situation. He took in his two nieces who lost their mother very early in life to become part of his family and cared for his sister and brother-in-law as they aged. Most of all he was an unwavering guardian and patient and compassionate caregiver for his wife as they graciously aged into their golden years. He embraced all of his extended family and friends as if they were his own. He was everyone’s go-to man whenever they needed help for whatever reason – at any time of the day or night. Ernie was there for everyone, putting the needs of others before his own. All who knew Ernie loved him for his warmth, compassion and care, not to mention his wit. Ernie’s memory will live on through the countless great stories (and many hilarious) that will continue to be told by his large family and many friends for years to come. When you depart this earth to be with the Lord in heaven the only thing you leave behind is your legacy. This is the legacy of the man affectionately known as the “BIG E” – forever known for his huge personality, his sense of humor, his big heart and generosity, his big blue eyes and warm smile. May you rest in peace. Following a private ceremony, Ernie will be laid to rest alongside his beloved wife at Gate of Heaven Mausoleum. Services will be scheduled at a later date due to the current pandemic and social distancing protocols that are in place. In lieu of flowers, please make donations in memory of Charter Grand Knight Joseph E. Potere: Fairfield Knights of Columbus Council #6380 PO Box 10925 Fairfield, NJ 07004

The family of Joseph "Ernie" Potere created this Life Tributes page to make it easy to share your memories.