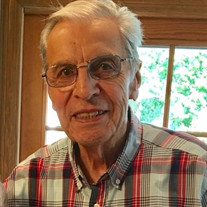 Louis M. Contaldi, Sr.,92,of Fairfield, New Jersey passed away on Saturday August, 22, 2020. Beloved husband of the late Louise (nee Spina). Loving father of Michael & his partner Caroline Dwyer, Shrewsbury NJ, Louis Jr. & his wife Frances, Parsippany NJ and Gregory & his wife Kathleen, Fairfield NJ. Cherished grandfather of Lauren & her husband William McBain, Michael Jr., Louis, III & his wife Audrey, Krista, Matthew, Gregory, Brian & Kyle. Adored great-grandfather of Emerson. Lou was an aerospace engineer who spent most of his career working for Singer-Kearfott in Little Falls & Totowa, NJ retiring in 1991. He could do it all: electric, plumbing, auto mechanic, construction, and gardening. Lou was the first called when any friends and family had a problem and he never hesitated to assist. Lou had a passion for bowling where he earned a Varsity Letter at Newark College of Engineering (NJIT) and continued to bowl well into his 80's. Lou was also an avid gardener where he won awards for his tomato crop. Mr. Contaldi was a Fairfield Cub Scout Leader for 12 years 1966-1977. Lou gave 36 years of service to the Township of Fairfield. He was a Councilman and Council President (82-87) at which time he was the Police and Fire Commissioner and for a brief period served as acting mayor, he also served on the planning board, only stepping down in 2019. He was an active parishioner of St. Thomas More Church where he was an usher, member of the Knights of Columbus and past Grand Knight. Funeral Friday 10AM from the Ippolito-Stellato Funeral Home, 7 Two Bridges Road, Fairfield. Funeral Mass 11AM St. Thomas More Church. Cremation Private. Friends will be received Thursday 2-4 & 6-9 PM. Donations may be made to NB4T, c/o Amy Goldberg, 20 Just Road, Fairfield, NJ 07004. New Beginnings for Tomorrow is a program for adults with developmental disabilities to create a bridge from the end of the educational experience to the beginning of adult life.

The family of Louis M Contaldi Sr. created this Life Tributes page to make it easy to share your memories.