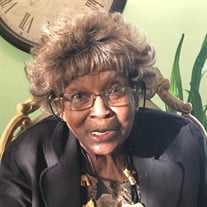 Louise (Lila) Jay passed away peacefully on Sunday, March 20, 2022, at her home in East Orange, New Jersey. She was surrounded by her family at the time of her transition. Louise was born on January 16, 1923, in Abbeville, South Carolina to Bernice Jacob. She was the eldest of two girls – protective big sister to Elaine Jones. As a young girl, Louise lived and worked on a farm in Abbeville where she picked cotton alongside her mom. They later moved to New York when Louise was a teenager – arriving in summer clothes in the middle of winter. She found a job working in a factory to help pay for the room she and her mom rented. Later, she branched out on her own, and created a career for herself as a homemaker. She worked with several families, including one family for over 20 years, where she helped to raise their children and tend to their home. She continued in this line of work until she retired well into her seventies – only after many negotiations and much convincing that it was time! Louise was the proud mom to eight children – the late Dolores (Ike), the late Diane (Albert), Audrey, the late Peggy, Elliott, the late Susan, Nathaniel, and Kevin (Indira) – each of whom were her pride and joy. She was the cherished grandmother of Vincent (Alketah), Terry ‘Tac’, Tiani, Tyrone, Jamine, Dejuan ‘Randy’, Wilton ‘Man’, Shekhinah (Derrick), Anastasia and Amber – several of whom she took on the responsibility of raising, following the untimely passing of her own children. Louise’s legacy continues to grow, as she was also an adored great-grandmother of 18 and 1 one the way – and a growing generation of great-great grands! Louise lived 99 very full years. When you consider the number of years she walked this earth, it is nearly impossible to summarize the full range of experiences she must have had. But what we can surmount is just the sheer strength, perseverance, power, love, care, dedication, and faith she must have tapped into throughout her life. She faced the great depression where she had to stand on line to receive bread and other handouts …she survived the Jim Crow era, segregation and the Civil Rights Movement…she raised eight children on her own while working to help other families…she had the strength to bury four of her own children, and then turn around and care for the children they left behind…she witnessed the birth of and held in her arms several of her great grandchildren…she participated in electing the first Black President…she saw her children and grandchildren earn degrees, build professional careers, start businesses, have families, buy homes – things she could not even fathom for herself as a young girl on the farm – but she laid the foundation for the next generations to have those opportunities. Louise leaves behind a great legacy that will continue to live on through the generations born from her – those that are here today, as well as those generations to come. Our ancestor Louise, she is a legend, a force, and a superhero. She was and will continue to be a pillar of pride, honor, and strength for our family and an extended and infinite community of friends and loved ones.

Louise (Lila) Jay passed away peacefully on Sunday, March 20, 2022, at her home in East Orange, New Jersey. She was surrounded by her family at the time of her transition. Louise was born on January 16, 1923, in Abbeville, South Carolina to... View Obituary & Service Information

The family of Louise Jay created this Life Tributes page to make it easy to share your memories.