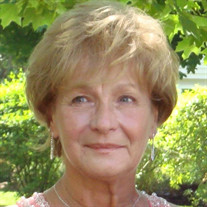 Beloved by everyone that has ever met her, Margaret Ann (Schultz) Gleason, affectionately known as Peggy, passed away on October 7th without pain, after living with rheumatoid arthritis & the undiagnosed incurable illness of idiopathic lung disease that was not identified until she had pneumonia last October. She was a young 75 years old and lived her life to please everyone. She is survived by Pat, her husband of 54 years, whom she met at age 16; her daughter Erinn and her husband Art and her son Ryan and his wife Kathleen; her grandchildren, Liam, Chloe, Alex, Christopher, and Laila; and her two brothers, Billy and Bobby Schultz. She is predeceased by her older sister Christine, who passed away in 2018. After graduating high school near the top of her class, Peggy married Pat when she was 21 years old. After marriage, she continued her college education and received a Summa Cum Laude degree in Elementary education. After teaching for 2 years, Peggy became a stay-at-home mother, taking the time to raise her 2 fantastic children, Erinn and Ryan. During this time, she took them to every available children’s attraction. She also became a seamstress, making drapes, clothing for her children, and some really fantastic Halloween costumes. It was also during this time that she and Pat owned several Standardbred race horses. Her first horse raced at the NJ Meadowlands Racetrack on its opening night in 1976. After ten years at home, Peggy returned to teaching full time and also returned to her education, earning a Masters degree. Peggy retired at the age of 61 and was joined in retirement by Pat 6 years later. She enjoyed retired life with her husband, children, and grandchildren over the next 8 years. She took many vacations throughout her life and all were special to her and memorable. Some of the highlights were Niagara Falls, Hawaii, her honeymoon in Bermuda, a one month trip to Florida, a Caribbean cruise for her college graduation, Cape May for her 25th anniversary, multiple trips to Disney World, 3 pleasure trips to Cancun, 2 trips to Spain for baptisms and Fallas, and a cruise to Bermuda for her 50th wedding anniversary. She travelled to Boston, Washington DC, Berlin, and Paris to watch her son run marathons. For someone who hated flying, she didn’t let that hold her back. Her last vacation was her trip to Disney 2 years ago with her husband, son, daughter-in-law, and 4 of her grandchildren. For over 30 years Peggy held a summer pool party called Festivus for family and friends. She worked extremely hard preparing food, especially her delicious meatballs, sausage bread, and fruit salad. She put so much time and effort into preparations, that she did not get the opportunity to fully enjoy the party herself and thanked all those that chipped in during the party. She wanted everyone to enjoy themselves. Peggy enjoyed reading, crossword puzzles, sudoku, gardening, and visiting the Jersey shore at Seaside Park. Her favorite TV shows were ‘Jeopardy’ and ‘Wheel of Fortune’, which she probably could have been a contestant on either, but she was too modest. She also liked watching cooking programs. Peggy loved teaching her students, because she loved all children. She also loved her extended family and friends. Above all, she loved her husband Pat; her daughter and son, Erinn and Ryan, and especially her grandchildren, Liam, Chloe, Alex, Christopher, and Laila. She brightened the life of all who met her, and she will be missed terribly by all. It was a wonderful life.

Beloved by everyone that has ever met her, Margaret Ann (Schultz) Gleason, affectionately known as Peggy, passed away on October 7th without pain, after living with rheumatoid arthritis & the undiagnosed incurable illness of idiopathic lung... View Obituary & Service Information

The family of Margaret Ann Gleason created this Life Tributes page to make it easy to share your memories.

Beloved by everyone that has ever met her, Margaret Ann (Schultz)...