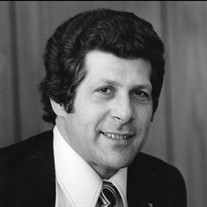 Richard J. Ingraffia, 82, of Lyndhurst, New Jersey, passed away on Thursday, March 25, 2021. Beloved and loyal husband of Jean Ingraffia. Loving and providing father of Richard "Rick" Ingraffia, Jr. & Michele, Michael Ingraffia, and Marianne Nicholas. Dear brother of Joseph Ingraffia, Joan Schober, and Mary Ann Collins. Cherished and proud grandfather of Michael R., Nicole & fianceé Nicholas, Alaina & husband Jessie, Jackie, Tommy, Brian, Michael and Luke. Rich or “Richie” was born in New York City, ultimately residing in Lyndhurst for the past 57 years with his wife Jean, to whom he was married for 62 years. He was civic-minded, serving a number of years as President of Lyndhurst Little League and later on the township Planning Board. He had a storied career in the Air Freight Industry, working 38 years for Emery Worldwide, and then an additional 23 years for DHL/Air Express International, retiring as Vice-President of Logistics, and then working in a consulting role for contract negotiations through 2016. He was appreciated and well-respected by company colleagues and employees, and Teamsters Union Representatives alike. AEI honored him at his retirement by unveiling the newly named Richard J Ingraffia Building at its Kennedy Airport complex. Avid bowler, golfer, gardener and New York Rangers fan, Rich was a member of the infamous Independent Men’s Club in his early adult years, enjoying picnics, outings and softball with family and friends, and the occasional Sunday morning beer after the games. Dad, to all of us, you were the best ever! Funeral Monday 9:30AM from the Ippolito-Stellato Funeral Home, 425 Ridge Road, Lyndhurst. Funeral Mass 10:30AM Sacred Heart R.C. Church. Cremation private. Friends will be received Sunday 2-6PM. In lieu of flowers donations may be made to Kaleidoscope of Hope Foundation, PO Box 1124, Madison NJ 07940. To watch Mr. Ingraffia’s Funeral Mass live please click the link below https://fb.me/e/1qc0ttUSt

The family of Richard J. Ingraffia created this Life Tributes page to make it easy to share your memories.