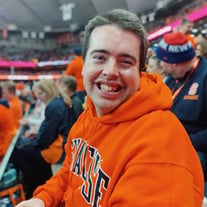 Sean Timothy Nelligan, beloved son of Maggie (McMorrow) Nelligan and TJ Nelligan, passed away unexpectedly on Sunday, June 16th. Sean’s life was a blessing to everyone who knew him during his twenty-nine wonderful years. He will be sorely missed but we are grateful for the many cherished memories we have of times spent with him. Sean is survived by his two adoring sisters, Moira and Meghan; Andrew, who he loved like a brother; two devoted dogs, Winnie and Ollie, who he endlessly smothered with love; his loving paternal grandparents, Timothy and Helen Nelligan; and numerous aunts, uncles, and cousins who love him dearly. Sean will be embraced by his paternal great-grandmother, Dodee; maternal grandparents, Edward and Mary Jane McMorrow; and his dog Charlie, who predeceased him. Sean was love and light in everything he did. He spent his first school years at The Children’s Center, where he was taught and loved by his favorite teacher and friend, Gail Booth. It was at The Children’s Center where Sean met his forever friend, Timmy Baird. Sean continued learning, growing and making lifelong friends at The Midland School, where he enjoyed creating a school-wide American Idol bracket, along with his teacher, Mrs. Tauscher. After graduating, Sean began working with his dad at Nelligan Sports Marketing, bringing his vast knowledge and enthusiasm for sports to work every day. He also began his 10-year career at The Montville Inn, where he worked alongside one of his dearest friends, Bobby Fredericks. He had great fun meeting and greeting new and old friends. In the last year, Sean began attending The Center for Enhancing Abilities in Cedar Knolls, NJ. His favorite activities at the center included yoga, poetry, and especially dance class, which he never wanted to end. Sean often let his mom know that picking him up early wasn’t an option. Sean was a Special Olympics athlete participating in track & field, bocce, soccer, bowling, and basketball, which was his favorite. As an enthusiastic player for the STORM team, Sean was as much a team player as he was the team’s biggest cheerleader, always handing out high-fives. Sean was the inspiration for Morristown-Beard’s annual charity basketball game, spearheaded by his sister, Meghan, now an alumna. Continuing into its seventh year, this event is all about the mutual love, respect, and support STORM and MBS have for one another and is the highlight of the year for both teams. Sean personified pure love and acceptance, his bright smile and positive attitude spread happiness to everyone who crossed his path. Aside from his dedication to Special Olympics and The Montville Inn, Sean was a tried and true New York sports fan, never missing a Giants or Yankees game. Sean was the family’s go-to person for anyone who wanted to talk sports, knowing everything from the weekly football scores to the new guy on third base. Sean’s taste was all-encompassing, he could happily go right from watching a Yankees game to laughing along to Impractical Jokers. He equally adored exciting sports outings with his dad and sitting in his favorite spot on the couch, watching a movie with his whole family and surprising us with his understanding of questionable R-rated jokes. We hope everyone remembers those simple lessons that Sean gave us: to be happy, accepting, and have a pure love of life. If you were lucky enough to receive one of Sean’s day-changing bear hugs, pass one on in his memory. A memorial service and celebration of Sean’s life will be held on Saturday, June 29th from 11 am to 3 pm at Park Avenue Club, 184 Park Avenue, Florham Park, NJ. Casual attire, as Sean would want it. The eulogy service will begin at 11:30 am and will be followed by time to share memories of Sean. We would love for everyone to bring their favorite story or memory. In lieu of flowers, please consider donations to Sean’s beloved Special Olympics Basketball team, STORM: Special Olympics New Jersey STORM Basketball Team 1 Eunice Kennedy Shriver Way Lawrence Township, NJ 08648 Envelopes addressed to the Special Olympics STORM team will be available at the memorial service. Arrangements under the direction of Ippolito-Stellato Funeral Home, 7 Two Bridges Road, Fairfield.

Sean Timothy Nelligan, beloved son of Maggie (McMorrow) Nelligan and TJ Nelligan, passed away unexpectedly on Sunday, June 16th. Sean&#8217;s life was a blessing to everyone who knew him during his twenty-nine wonderful years. He will be... View Obituary & Service Information

The family of Sean Timothy Nelligan created this Life Tributes page to make it easy to share your memories.