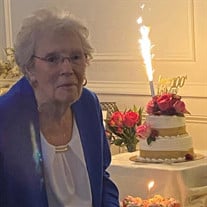 Selma “Sally” English, RN b. 8/8/1921 d. 12/2/2021 Born Selma Florence Erickson to Walter and Josephine Kieffer Erickson in Jersey City, NJ. Sally, as she preferred to be called, was the middle child of 5 sisters (“The Erickson Girls”) and one brother. She graduated from Snyder HS in Jersey City. She took a different career path than her sisters and chose to attend Christ Hospital School of Nursing, also in Jersey City, graduating with an R.N. Shortly thereafter Sally enlisted in the US Navy Nurse Corps and was stationed at Camp LeJeune, NC, where she tended to many WW2 injured soldiers. It was also there that she met and married Donald English. Unfortunately, at that time, female officers were not permitted to associate with the enlisted men and so she was honorably discharged from the Navy. Sally continued to work as a nurse throughout her life, even while raising her 3 children. She was a nursing supervisor at local nursing homes and eventually joined the staff of Chilton Memorial Hospital in Pompton Plains, where she became a floor supervisor, a position she held until she retired. Upon retirement, she was asked to return to work in Chilton’s Utilization Review department, a position she held until she once again retired at age 82! She was a true taskmaster, always placing the care and comfort of the patients first, winning the respect and admiration of both staff and physicians alike. Sally was welcomed into God’s Kingdom by her parents and her siblings, Elizabeth Bradford, Josephine Ciak, Alice Tassoni, Miriam Eaton Goldman and Walter Earl Erickson. Sally is survived by her beloved children, Donald J. English of Tamarac, FL, Sally DeMuth and husband Robert of Wayne, NJ, and David G. English and wife Donna of Tiverton, RI. Devotedly referred to as “Grams” by her grandchildren, Dana DeMuth (Anthony) Pugliano, Robert DeMuth (Jennifer), and Timothy DeMuth, as well as cherished great grandchildren Joseph, Daniel, and Madeline Pugliano and Natalie, Robert J., and Laurel DeMuth. Also survived by and blessed with many nieces and nephews, most affectionately Pamela Tassoni Russo. Memorial contributions can be made to the Wounded Warrior Project, PO Box 758516, Topeka KS 66675-8516 or a charity of choice A memorial and celebration of life will be held Wednesday January 5, 2022 11AM - 1PM at Ippolito-Stellato Funeral Home, 7 Two Bridges Rd., Fairfield, NJ.

The family of Selma Sally English created this Life Tributes page to make it easy to share your memories.